Body Language in the Digital Workspace 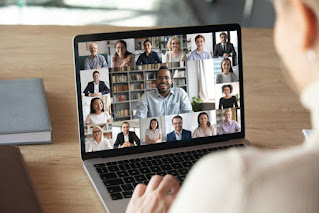 The pandemic has exiled many workers into the cloud – a de facto digital Off-World colony as in the dystopic movie Blade Runner which has redefined how workers communicate. The parallel to the movie, which ironically was released in 2019, the same year in which Covid appeared, is unerring to the present-day crisis. In the movie those who were could not pass the medical remained in a hyper-dense, environmental petri dish. In 2020 those whose professions require hands-on work such as essential workers in the medical field and support services as well as those in retail and blue-collar jobs, must also toil in a viral toxic environment.

During the carefree pre-pandemic era, the visual cues at work with respect to body language determined whether the worker’s body language was (in)congruent with their words.

Since the digital world has dominated communications since March and will continue well into 2021, the ability to accurately read body language has greatly diminished. With far fewer visual ‘tells’ remote work has become literally remote communication in the non-technical sense.

We Are All Digital Ambassadors

Since March those fortunate to work remotely have communicated via Zoom or similar software. Regardless of their title or positions, the worker has seized the initiative to take advantage in becoming their own movie director and producer by leveraging their home as their Hollywood studio with complete control of what viewers see.

Human contact is paramount and provides a modicum of warmth even the most austere and sterile designed office space. Remote work offers a psychological sabbatical for many workers with respect to having total control over their work environment for several reasons. Job satisfaction has been declining for years as management imposes greater demands, longer work hours, greater responsibility but stagnant pay, and limited promotional opportunities particularly for middle age workers who are trapped under the invisible glass of age-discrimination. In other words the digital workplace provides a certain albeit temporary level of empowerment.

The virtual cloud allows the ability to merge the visual special effects of the movies: The Matrix meets Inception. As a creator the worker creates and customizes his own environment and reality to “get ready for his close-up.”

Because video meetings are usually pre-scheduled, they provide the worker more time to literally “set the stage” and prepare his work and personal presentation which eliminates the sudden impromptu face-to-face meeting. This allows the worker to gradually develop an Academy Award worthy performance in a familiar and customized setting. Off-screen is “out of sight, out of mind” but beware the ‘hot’ mic. In this era of the split screen, a split-personality is the only way to go.

Putting this same high-level, on-screen performance in person at the office all day, every day is exhausting. Murphy’s Law dictates than any slip-up will occur at the wrong place, at the wrong time in the presence of the wrong person or group.

Determining the new body language baseline in the digital world is far more challenging for several reasons. The primary difficult is that many workers are reinventing themselves on camera because of their remote location in their fortress home and can confidently establish new personas.

Although one can use vocal cues such as inflections, tonality, and cadence as a guide, some people verbally communicate somewhat differently in person vs on the phone vs teleconferencing in which older quirks are not visible or suppressed and new ones are accentuated.

With respect to visual cues, a considerable component of body language has been removed because one only views the upper body or perhaps only the head of the person on screen. Nervous tics, gestures, and tells can be more easily hidden by creative camera angles, lighting and positioning or simply filling the screen with the person’s face.

Because of the aforementioned reasons, the digital arrangement forces reading body language far more challenging because the baseline has shifted dramatically.

Body language is an important component in the face-to-face business world. However the present-day necessity and convenience of digital communications has eliminated a critical element – the collective group body language - whether internally (in-house) or externally in negotiating with an outside firm.

Face-to-face meetings often feature several members of varying seniority of a specific unit, department or division. Each individual provides his own unique specific body language baseline signature. Using these behavioral baselines, tells determine whether everybody in the unit is onboard with an idea. An example could be a manager’s effusive proposal genuinely supported by his body language yet betrayed by his underlings’ body language that convey profound reservations.

However in remote meetings, there’s only one view of each member of a group as separate individuals, not as a collective as it would be in person. To the untrained eye in remote viewing it’s impossible to determine whether the group’s body language moves in harmony or independently.

Because of this digital silo effect, monitoring the screens in which this group appears and correctly ascertaining the group dynamic is difficult by the highly controlled environment each person has created for himself for purposes of career/job self-preservation.

Remote meetings eliminate the power dynamics of the seating arrangements which provide a strong signal as to which persons have the most influence regardless of official title.

On the bright side for workers, remote meetings prevent a senior member from using psychological leverage (aka intimidation or bullying) not only in physical space but also in power settings like their office or an executive conference room.

The C-Suite Dilemma | Lost in Translation

Executives get paid the big bucks because they are the decision-makers. However because they rely heavily on face-to-face visual cues to determine the level of certainty on information provided, remote communication makes this much harder to assess despite state-of-the-art, computer-driven data.

The C-suite needs to know in their gut whether their underlings genuinely believe the figures they’ve presented, particularly with group presentations. Because of a fragile economy there’s far more at stake than market share and profitability to the point that their decisions will determine if the firm survives. This is why face-to-face meetings are more invaluable further up the corporate command chain.

Some firms in professions that can easily operate profitably with a large portion of their staff working remotely will begin to re-think whether important meetings are best held in-person rather than remotely. In particular in high stakes, highly competitive fields, the savvy C-suite executive may insist that his direct reports be in the office full-time and insist that they in turn do the same for their important internal meetings. The post-pandemic economic landscape is about to get rougher and seeing whether someone sweats or stays “cool, calm and collective” may make the biggest difference.

Posted by Atthehighestelevels at 1:00 PM