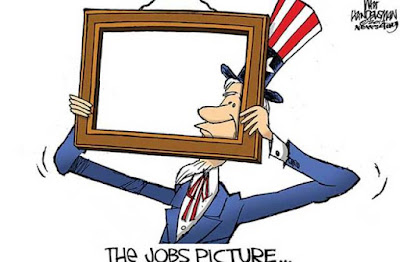 It is an open secret of the extreme disconnect between the surge in the stock market erroneously labeled as an “economic recovery” that’s underway and the brutal suffering and reality of the common working man and woman.

Indeed there is a psychological pent-up demand, a nostalgic desire to return to the old normal in a new normal era. For this reason once the vaccine is widely distributed there will be an economic spike fueled by consumer demand but it will be short-lived as the reality of a continued broken economy and broken personal finances set in. Even your currently employed consumer will realize his limited post-pandemic financial resources because of the changing work dynamics and even pay cut if he decides to continue to work remotely.

Some “vigilante” small businesses, particularly the low profit margin eateries and bars, remain open in defiance of government mandates with respect to indoor and outdoor dining restrictions. Then there are the lucky ones in some municipalities in which the restrictions are on the books yet unenforced.

Understandably from the small business perspective it’s profits over pandemics for the purposes of survival – for the owners, not just the business - because the governmental restrictions, not the virus, represent an existential threat. They know that the cavalry is not coming because government bailouts are only for big businesses. In fact the government is seen not as the rescuing and protective cavalry of the small business owner, rather as rapturous raiders who have historically decimated their profits through capricious regulations and high taxes. For the little guy there are no parachutes. It’s “go for broke” and “go down swinging.”

How It Plays Out

The emergence from the “Dark Winter” of 2020-2021 will ignore the economic rubble with the brief spurt in consumer spending that will give the mainstream media the illusion of a V-shaped recovery underway. This ultra- short-term jump in consumer spending is just that, V-shaped spending but not V-shaped recovery. Recovery is sustainable over many months or years. The mass inoculation gives consumers freedom of movement but because of continued mass unemployment, will be still imprisoned by debt.

For this reason the markets will push further into record territory as the black-clad Pied Piper leading investors merrily over the edge because of this misread, and for others who do recognize it, pure greed thinking they can exit before it crashes. As I’ve always stated, regardless how quickly you exit is meaningless when the entire building is collapsing.

The following chart entitled Service Sector Struggles to Recover Lost Jobs provided by the US Bureau of Labor Statistics and presented by Statista, an online statistical firm, shows the dire situation of the leisure & hospitality sector which has lost almost 3.5 million jobs. The sectors that have suffered the most are the ones that are labor-intensive, difficult to automat and the last ones to make considerable recoveries. 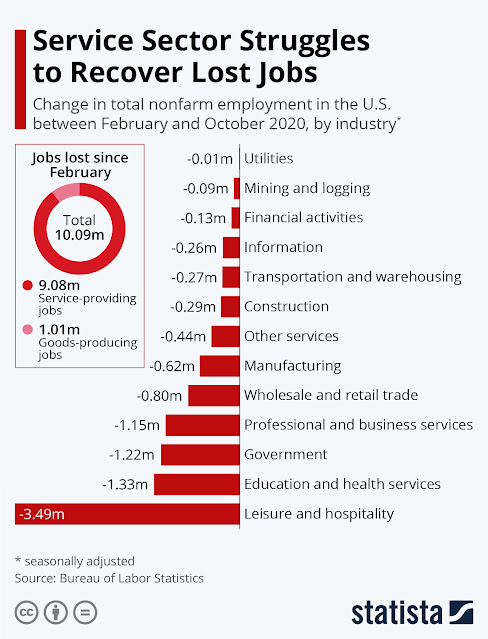 These job losses are far too severe for even the most robust V-shaped economic recovery to bring it back close to pre-pandemic levels even by end of 2021. Mass unemployment, corporate reconfiguration and overhauling 2021 budgets to adapt to a less intense work environment, robotics/automation, high level of flexibility indicate a cautious, uneven, drawn out economic recovery. Corporate financial projections beyond 3 years are not better than using a dart board.

Not only immediate (or near) post-pandemic rather medium-term consumer behavior during unprecedented times. We’ve endured three catastrophes in the 21st century in less than a generation: 9/11, the Great Recession and Covid-19, all of which has directly or indirectly affected most of the world’s population.

These aforementioned catastrophes mirror the more often occurring “once-in-a-century” occurrence which has now become a misnomer. Because the intensity of these oft-occurring catastrophes are uncontrollable and unpredictable, it’s near impossible economically and psychologically to prepare properly for every type of catastrophe.

Imagine the possibility of a future far worse pandemic (Covid-19’s ease of transmission with Ebola’s lethality) or a market crash occurring in short order and longer lasting than their predecessors.

For these reasons it may prompt a redefinition of how short, medium and long-term are defined. In broad terms, when people think of long-term one imagines 10, 15 or 20 years. Using the first 20 years of this century as a baseline, short-term may now be one year, medium term 2-5 years and long-term 5-10 years – in other words a time compression outlook.

As the impossible has become the plausible, personal, business and government expenditures may take on a new dynamic with a radically different projections and risk assessment models.

Posted by Atthehighestelevels at 2:37 PM