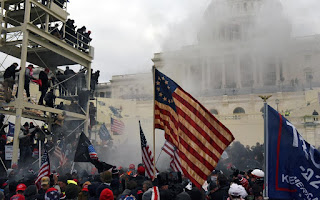 An extremely dark historical déjà vu reenactment is being played out present-day in real time that is recreating events in the tumultuous year of 1968. Thousands of American extras are engaged throughout the country in sowing violence & mayhem in a reenactment of the Tet offensive but on American soil potentially at the Inauguration and certainly post-Inauguration.

Already the FBI is vetting members of the National Guard brought in from numerous states who are assigned to support local law enforcement against violent protests and any other threats during the Inauguration.

·         Firstly, it seems an impossible task to vet every one of the thousands National Guardsman thoroughly enough to pass with a high degree of certainty that a member poses no threat during the ceremony.

·         Secondly, is the FBI vetting local law enforcement from which several members were alleged to be sympathetic to the pro-Trump protestors who laid siege on the Capital building?

·         Thirdly, and not least, following the old security adage, who’s vetting the FBI?

Disturbingly neither the National Guard nor local law enforcement in any part of the country have the training and experience in riot-control or have sufficient riot-specific equipment. For this reason to compensate, the temptation to use excessive force, particularly if they feel that their lives are in danger, is extremely high.

This is why the alleged pro-Trump plan to protest at 50 state capitals regardless of the size or even non-violent protest is a devious quantitative gambit. The odds of any protest, anywhere devolving into violent confrontation is high and can trigger a cascade of escalations elsewhere thanks to social media.

The Vietcong (VC) launched the infamous Tet Offense – the Vietnamese New Year – on January 30, 1968 with simultaneous attacks on 100 towns and cities throughout the country. Their objective was to provoke a popular uprising against the South Vietnamese government. Although despite the ferocity of their efforts the VC failed militarily but won politically in the long run because it decisively turned the American public against the US government’s involvement in Vietnam.

Jumping off the pages of a Twilight Zone script, a disturbing historical parallel is unfolding domestically in which, according to the FBI, a determined and well-supported armed anti-government movement is threatening 50 state capitals.

The following are the astonishing historical parallels between the Tet offensive in 1968 and the present-day violence in the US 53 years later in the same month:

·         The US was deeply divided politically and racially during the 1960s and present-day with violent protests that led up to the furious assault on government buildings.

·         The VC assault took place during Tet - their Lunar New Year - while the assault on the US Capitol building took place near our political New Year called The Inauguration in the same month of January.

·         In Vietnam and the US extremist elements surprised governmental forces.

·         Anti-government forces, VC and pro-Trump extremists, assault the US Embassy in Saigon (then South Vietnam’s capital) and the US Capitol building in Washington, DC, respectively.

·         In each assault the VC and extremists breached the outer security perimeter and had the opportunity to breach the inner sanctum to kidnap, or perhaps worse, the US Ambassador and Congressional members, respectively but never did.

·         Throughout Vietnam assaults against US and South Vietnamese forces raged. Present-day potential violent forces are targeting government, corporate and other important buildings.

Seizing power through physical confrontation and reversing the election results is impossible. However like the VC, politically pro-Trump supporters can gain more sympathizers by planting the seeds for the GOP’s eventual return to the White House in 2024.

Because the venues for Inauguration Day are already predetermined pro-Trump supporters may encounter counter-protests at many of these venues. In other words, all hell could break loose throughout the week with the National Guard, law enforcement and citizens caught in the middle of endless riot firestorms.

The following chart entitled DC Troop Levels Five Times as High as Iraq & Afghanistan provided by the US Department of Defense, Task & Purpose, The Drive and provided by Statista, an online statistical firm, embarrassingly shows the overwhelming force required to maintain the peaceful transfer of power in the nation’s capital. 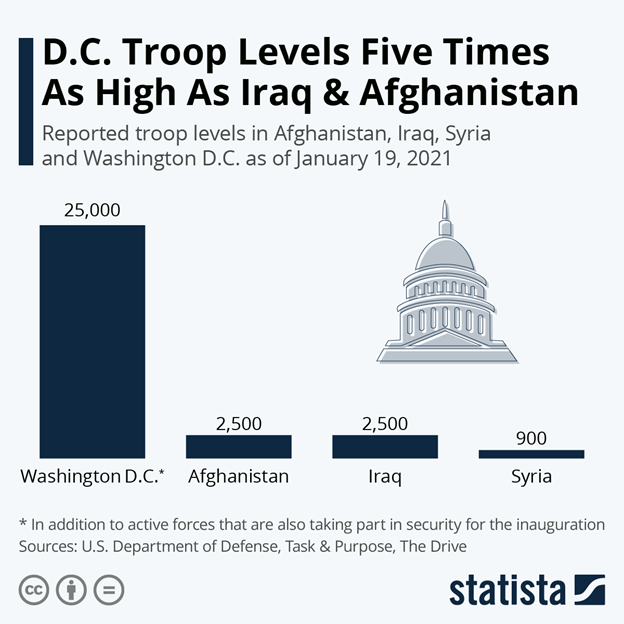 “Smile! You’re On Candid Camera!” | Citizens With Nothing to Lose

It may seem odd and ludicrous that the many pro-Trump supporters who stormed the US Capitol building not only didn’t wear masks but enthusiastically took selfies, were easily identifiable afterwards. This meant that the rioters absolutely knew beforehand that their images would be recorded by security cameras in and around Capital building but didn’t care that it would lead to criminal charges, loss of jobs or become nearly unemployable when identified.

The aforementioned is the unsettling part because it signifies that these are people who feel that they have nothing to lose and, as the adage goes, makes this group extremely dangerous. Just as the Western media is befuddled about the religious true believers in emerging and developing countries who are willing to risk everything against their respective present-day governments or join violent groups in failed states, the same is being played out domestically.

Similar to the Tet offensive, it also means that these protests will not simmer down or burn out over the course of several weeks or months, rather during the entire Biden administration until the climax of the 2024 US presidential election with the tacit support of likeminded powerful elements at the highest levels of every industry.

Interestingly there’s a stupefying weird perspective of the present-day violent surge of pro-Trump protests. During Trump’s 2016 inauguration there was a paucity of these same pro-Trump supporters to celebrate his election victory. Yet they’ve emerged from every nook & cranny in the thousands as Trump is about to leave office to fervently support him at his unabashed urging and continue the fight against the Biden Inauguration.

“Who Are Those Guys?” | Mainstream Citizens Going Mad

The following chart entitled Anti-Government Extremist Groups in the US provided by the Southern Poverty Law Center and provided by Statista, underscores the continued anti-government groups in the US. Although the number of groups have declined since the Obama administration, many of these present-day extremists – a cross-section of American society from struggling blue workers to highly-paid white collar professionals are radicalized with an unabashed willingness in committing violent acts. 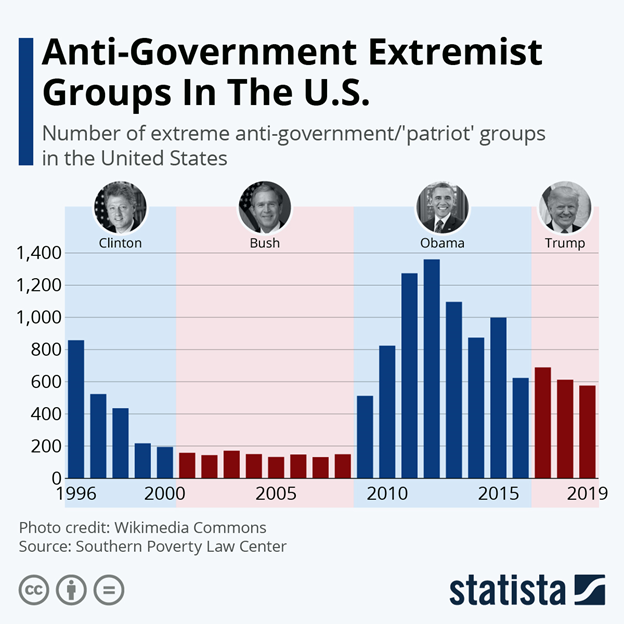 The ominous coalescence of the present-day groups is that they bring a dangerous cross-section of skill sets, experience and insider knowledge from a wide variety of professions to more effectively undermine the incoming administration which makes them far more dangerous than the earlier street thuggish, anti-government groups.

Bright Light in a Narrow Tunnel

The urgency of the Biden administration is to avoid a “Dark Winter 2” in 2021-2022 at all costs. If this spring through early fall Covid cases and deaths fail to abate and supersede inoculations, and medical personnel burn-out with hospitals running out of supplies, equipment & medicine, the US could become a struggling faraway emerging country with enormous resources blocked but by incompetence and corruption.

The realpolitik is that Covid has become a sideshow, a political lightning rod for the opposition. Defeating Covid is a matter of scientific power which is slowly being accomplished.

The real issue is the faltering real economy which has enslaved millions of Americans into debt and poverty. The citizenry is infuriated because they believe that the decades-old socio-economic-political structure has failed them over the course of many administrations and caters exclusively and rather openly to the elite. To put it bluntly these citizens have many valid points. The government and corporations have the power yet lack the will to make fundamental structural changes for the public good.

With opposing sides digging in their heels unwilling to even discuss these matters in earnest, as the song goes “Something’s gotta give” but may be increasingly decided on the streets, not at the ballot box.

Posted by Atthehighestelevels at 3:47 PM