The Searing Summer of Chaos 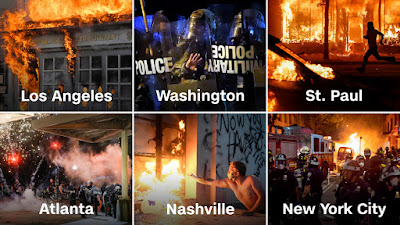 The Calm Before the Storm

First the good news. Distribution hiccups vaccinations are continuing along while the loosening of social distancing restrictions throughout the country results in more commercial openings. Furthermore the new administration is behaving normally (aka reasonably predictably) while the stock market is enjoying a powerful record-setting upward surge.

Now the bad news. These positive trends represent the calm before the storm as powerful undercurrents threaten to derail the economic recovery as America strives to achieve a modicum of pre-pandemic (new) normalcy. The troika of potential trigger-point events are as follows:

1.    Political Stability: a newly elected elderly president whose mental acuity has been justifiably questioned as far back as his nomination.

2.    Urban Security: the George Floyd trial is a lightning rod for potential urban explosiveness on America’s streets that might last for months.

3.    Food Insecurity: this fragile logistical system continues to function under enormous stress and any compromise or breakdown can result in civil unrest throughout the country.

When President Joe Biden officially took office in January he became the oldest US president in history at 78 years old. Even to an untrained observer, it’s doubtful that President Biden’s mental acuity meets the requirements of a Commander in Chief particularly during the most tumultuous period of American history since the Civil War. Managing a present-day hydra-headed crisis would be taxing even for the youngest, most intellectually and psychologically robust of former US presidents.

This is not a criticism of Biden’s experience and ability to lead particularly as Obama’s Vice President for 8 years. Rather he’s not the Biden from 12 years ago. His recent physical missteps in boarding Air Force One are symbolic of his health concerns. As the elderly elder statesman his ability may soon be limited to that of a cardboard cutout, which is not what America needs today. To put it bluntly, he’s the wrong man in the wrong place at the wrong time.

The unspoken truth is that the Biden-Harris duo are not particularly popular nor widely adored – and this is just among Democrats. Their attempt to recapture former President Obama’s rockstar credibility, status and magic amongst the Democrats is not forthcoming and never will. Without it, they will struggle mightily to galvanize support and healing amongst America’s badly fractured political and societal elements.

Because of his elderly condition it would not be unreasonable that Vice President Kamala Harris could assume some or most of Biden’s responsibilities soon than later. It would not be surprising if the present-day President-Vice President dynamic was initially pre-planned as a dual-leadership dynamic while Harris undergoes an accelerated succession grooming program.

Should Harris rise to the presidency, whether in a temporary or permanent capacity, she will face a series of daunting problems, none of which has anything to do with the pandemic or economic recovery:

·         A woman whose parents were immigrants (more racism, nationalism) – accusations that she’s a foreign agent at the highest levels – a Trojan Horse to replace Biden at a moment’s notice.

·         A woman whose husband is Jewish (racism, anti-Semitism) and supported by any number of ludicrous Jewish conspiracy theories.

With respect to the far-right and nationalists, former President Obama was an unacceptable aberration. Should Harris assume the presidency or assume presidential tasks, her mere presence for the aforementioned reasons would send them over the edge.

How this scenario might play out leads back to the January insurrection at the Capitol building. Tactically the assault was an overwhelming success in breaching security and merely a warm-up for things to come. The lessons learned by the mob which included many experienced (ex)-military, law enforcement and other security professionals parallels the Allies’ August 1942 Dieppe raid in France against Nazi German defenders.

In an historically little-known amphibious operation, the objective was to send 10,000 mostly Canadian troops to the northern port of Dieppe, France, hold it for 24 hours, disrupt German operations and return to the UK for the purposes of intelligence gathering particularly how the Germans respond. Although many men were lost in this limited pre-Normandy operation, valuable intelligence was obtained on German defenses than enabled the Allies to adjust and successfully launch D-Day 2 years later.

This doesn’t mean a future assault on the Capital building especially since security has been fortified and placed on high alert, rather on any other municipal, state or federal building with organized assaults and long-term occupation. Law enforcement has been struggling with on-going security “operations” on the Northwest urban battlegrounds where the more disenchanted members of the citizenry are now well-versed and experienced in violent tactics.

The trial of police officer Derek Chauvin, who is accused of murdering George Floyd, is heading full speed on the “road to perdition” as yet another American Shakespearean tragedy potentially on a massive scale. Although this is legally a local matter, the trial has powerful domestic and residual international implications that puts the American justice system on trial which is viewed or perceived as a moral bellwether.

As fictional hedge fund owner Bobby Axelrod in the TV series “Billions” explained, “No one leaves a negotiation happy.” Whatever the verdict all sides will claim that a gross injustice has been perpetuated by the fascist or Communist cabal of elites.

Protests on an unprecedented scale will follow throughout the country overwhelming law enforcement, and inevitably the National Guard, lasting for months throughout the summer and early fall.

The new trend is that there may be larger and more direct confrontations between large groups of politically diametrically opposed groups recreating a 1920s Weimar Germany in America with an aging late 70s President Joe Biden just as late 70s German President Paul von Hindenburg.

This is the proverbial elephant in the room, an emerging dilemma that impacts everyone. The emerging confluence of fragile supply chains, dramatic food price increases far exceeding inflation and food waste against the backdrop of massive job losses creates a desperate situation for Americans. The February month-on-month employment figures comparing 2020 to 2021 indicates that the US is still short 9.5 million jobs which makes making food purchases a matter of survival, not just clever budgeting.

Global and domestic supply chains woes will continue with stark vulnerabilities despite vaccinations and easing of restrictions. It was just as fragile for many years before the pandemic thanks to demands for greater cost efficiency in providing highly-competitive pricing through “just in time” deliveries.

Back in the day, robust and efficient logistics were traditionally America’s strength however within a couple of decades it has become it’s Achilles heel.

According to the UN Food Security World Food program food insecurity in developing world nearly doubled to 265 million citizens in 2020. Not only are millions of Americans lining up at food banks but also in Western Europe, notably France, Europe’s second largest economy after Germany. The societal and health & safety crisis now parallels those same dilemmas in emerging countries.

The following chart entitled Global Food Prices on the Uptick provided by the Food & Agricultural Organization of the UN (FAO) and presented by Statista, an online statistical firm, underscore the shocking spike in food prices which are devastating to those suffering through job losses and with limited income. 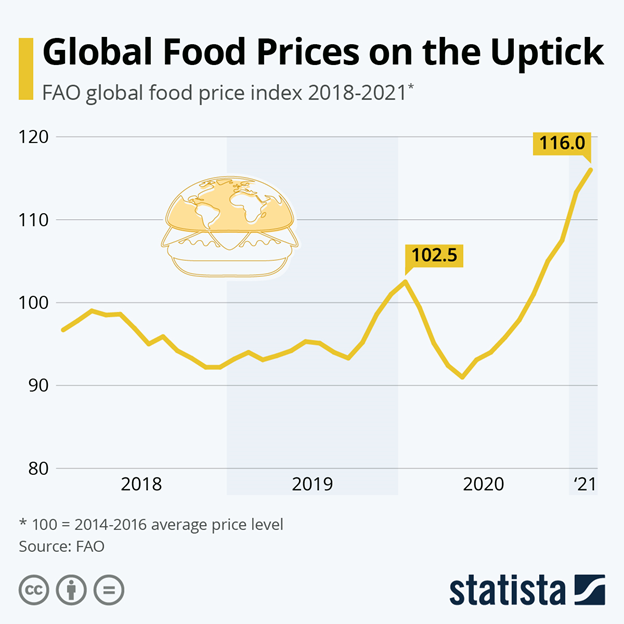 Food price increases have been running well ahead of inflation, often into double-digits. More disturbingly food companies have shrunk the quantity of food within the same packaging with unchanged prices, far fewer choices and stubbornly low inventory. The inevitable meteorological disasters such as droughts in the food belt and wildfires in California pushed food prices upward even further. Finally the crisis is exacerbated by store closures dominated and dictated by agricultural behemoths turning food deserts into wastelands, areas where food availability was unaffordable and now could be unobtainable.

The following chart entitled The Enormous Scale of Food Waste provided by the United Nations Environment Program (UNEP) to which the US is behind China and India. 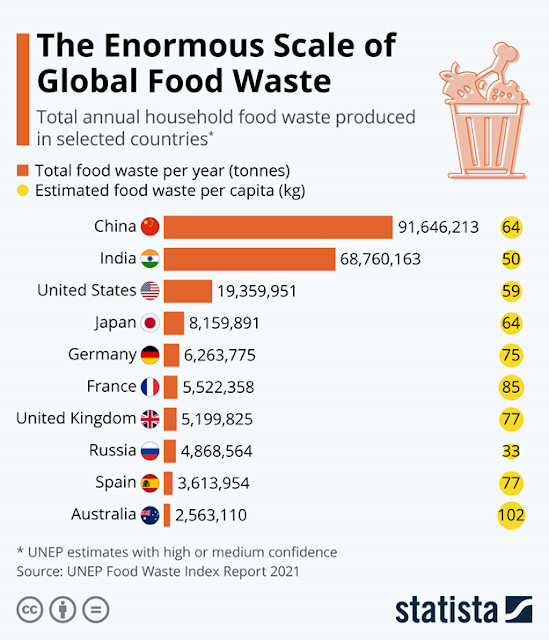 Although China and India occupy the top two positions, it must be noted that they are the world’s most populous countries each with 1.4 billion citizens. The more revealing statistic (the figures highlighted in yellow) is the estimated food waste per capita. For the US when one converts 59 kgs to lbs the US wastes 130 lbs of food per capita.

Additional figures not in the chart but included in the Food Waste Index Report 2021 by the UNEP is that the US food service sector wastes 141 lbs of food per capita and 35 lbs per capita in the retail sector.

For this reason we see the disturbing disconnect between America as the world’s breadbasket while millions of Americans suffer from food insecurity while still wasting food. It’s like filling your vehicle’s gas tank with outrageously priced fuel with a leaky gas tank.

Against a landscape of food insecurity private agribusinesses and its affiliates are a de facto oligopoly providing donations and often directly or indirectly operating food banks. These are the same corporations that influence food prices and ironically force many low-income and newly low-income consumers to become dependent on food banks from which these agribusinesses receive exceptionally generous governmental tax benefits.

Because of the conflicting economics the food supply & demand formula fails as a predictive indicator of price and level of risk because food supply & demand are “managed” by the private-public partnership. For this reason, this arrangement erases any credibility of so-called official projections or assurances by private industry and government.

This flawed and technically corrupt operational and economic model endangers the public health & welfare and requires an overhaul requiring political will, something rarer than a do-do bird. These factors are a witch’s brew that could provoke violent civil unrest regardless of political affiliation as underscored in my article originally published almost a year ago on 28 April 2020 entitled Impending Food Shortage to Provoke Civil Unrest. The vaccines will assuage the fear of Covid-19 itself, but not the aftermath of a parallel man-made crisis

The Cerulean Council is a NYC-based think-tank that provides prescient, beyond-the-horizon, contrarian perspectives and risk assessments on geopolitical dynamics and global urban security with counter-intuitive solutions.

Posted by Atthehighestelevels at 7:54 PM