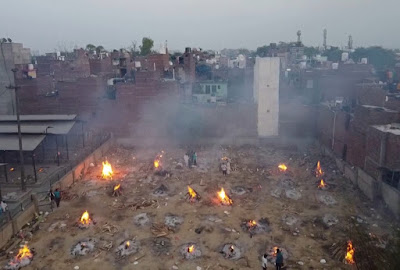 The dystopic perfect storm is unfolding in India with record-breaking daily new Covid cases and deaths that may continue unabated through the rest of 2021 buffeting the South Asian country of 1.4 billion inhabitants.

A little over a year ago on 17 April 2020 I published an article entitled India Bracing for the Covid-19 Viral Contagion which articulated the multitude of powerful interwoven factors that will compound the pandemic’s spread, depth and duration which are being played out as forecast resulting in untold human suffering.

This present-day article reintroduces those factors with updated supporting charts and documentation to provide a comprehensive overview of this calamity. The factors discussed are as follows:

According to the 22 February 2020 IMF report, India has the world’s 5th largest economy as measured by nominal GDP. Nonetheless it faces a daunting task in containing Covid-19 virus because of its socio-economic profile, public health infrastructure, shortfall in medical preparedness, polluted environment and government whose policy and decision makers are political loyalists rather than experienced technocrats and specialists.

According to the June 2017 report India’s Smart Cities Missions these are some critical data. Of the total population of 1.4 billion:

·         About 36 per cent of households in these settlements do not have basic facilities of electricity, tap water, and sanitation within their premises.

·         Historically there is a large rural to urban migration in search for work.

The following are key points discussed which I paraphrase with respect to India’s health care dilemmas from 12 June 2019 article entitled India’s Ailing Health Sector in the publication The Diplomat:

·         The geographical distribution is a problem with two-thirds of doctors, nurses, and midwives working in urban areas where only 29 percent of Indians live. In many villages, the density of healthcare professionals lags behind many African countries.

·         India’s low spending on healthcare. Despite being the world’s fifth largest economy, public health spending has languished at under 1.5 percent of GDP, one of the lowest rates in the world. For comparison, the United Kingdom shelled out 9.6 percent of its GDP in 2017 on health. The United States’ health expenditure is 18 percent of GDP.

·         The high cost of medicines in which an overwhelming 70 percent of healthcare expenses in India are paid by Indian patients out of their own pockets, one of the highest rates in the world.

Not only has the paucity of testing kits and testing resulted in the grossly under-stated numbers of infected, there are fewer medical doctors per 1,000 inhabitants despite India having the world’s 5th largest GDP and few health equipment & supply resources to grapple with the viral conflagration.

Far more embarrassing is that India is the leading producer of generic vaccines yet is having enormous difficulties in producing enough anti-Covid vaccines for domestic distribution which will unnecessarily prolong the crisis. At present only 3% of the population has been inoculated.

The following 19 March 2019 chart entitled The Countries with the Highest Density of Doctors provided by OECD highlights the dearth of doctors in India per 1,000 inhabitants: 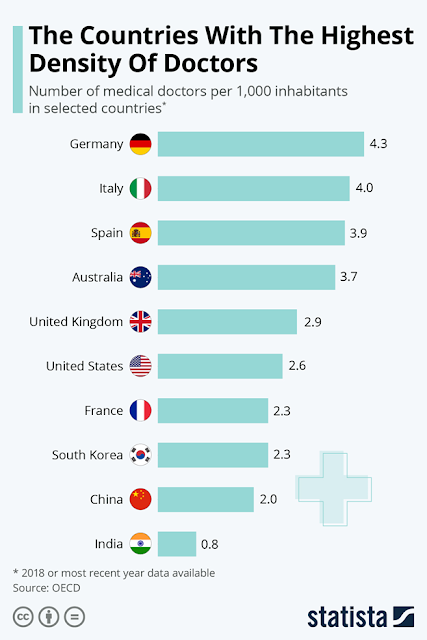 India’s high pollution serves as an accelerant for the spread of Covid-19 amongst a wider demographic. According to the IQ Air Report, India has 14 of the top 20 most polluted cities in the world. In the following chart entitled Study: Pollution Kills 8.3 Million People Annually from the Global Alliance On Health and Pollution published 20 December 2019. 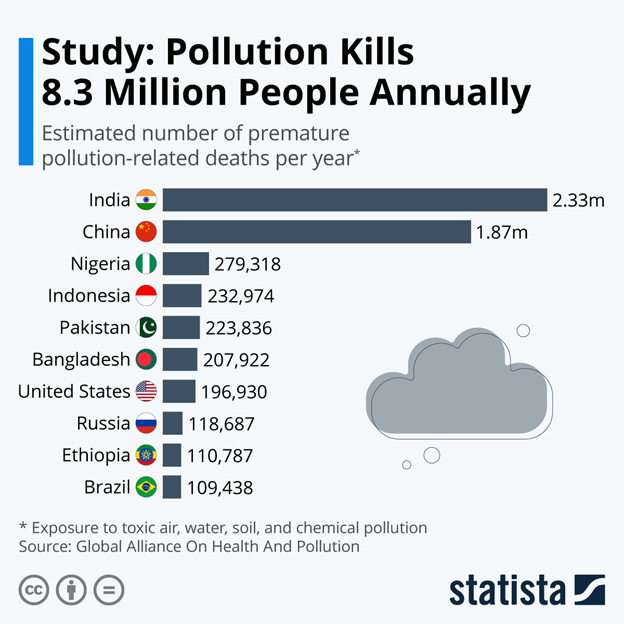 The high Covid-19 infection rate for infants and young people should not be a mystery to the medical establishment and researchers because for decades from birth the autoimmune systems of Indian urbanites has been compromised manifesting in underlying health issues such as hypertension and respiratory problems.

Specific to cities the following chart provided by IQAir is entitled India Has The Most Polluted Cities on Earth of which 14 are Indian, 3 are Pakistani and two are Chinese. 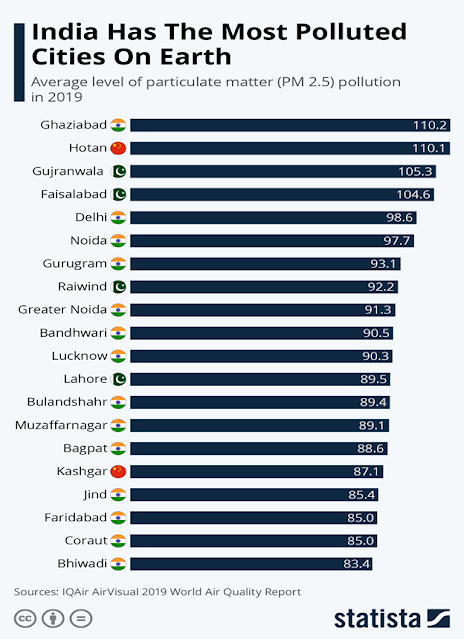 The explosive conflagration how Covid-19 is spreading throughout Asia can be viewed in the following chart entitled New Coronavirus Waves Sweep Through Asia provided by John Hopkins University via Our World in Data: 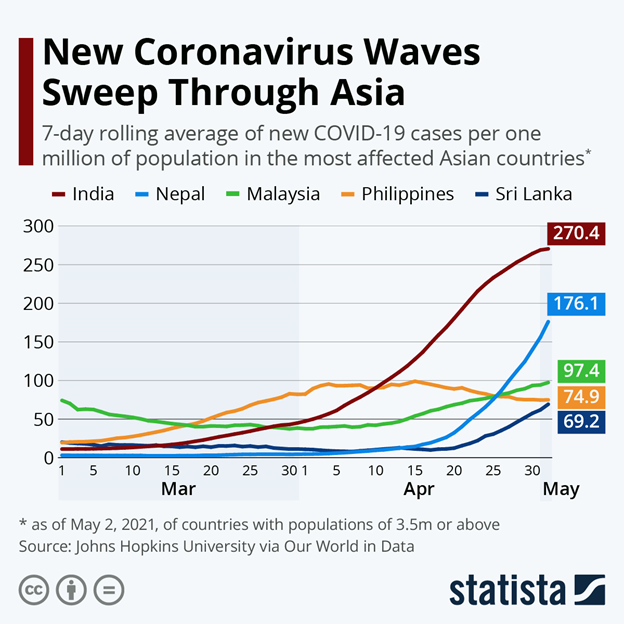 This viral conflagration specific to India vs the world can be contributed to the aforementioned environmental and healthcare shortfalls. The following chart entitled India Emerges as the World’s Covid19 Hotspot, provided by Our World in Data provides a powerful visual image of the present-day trend 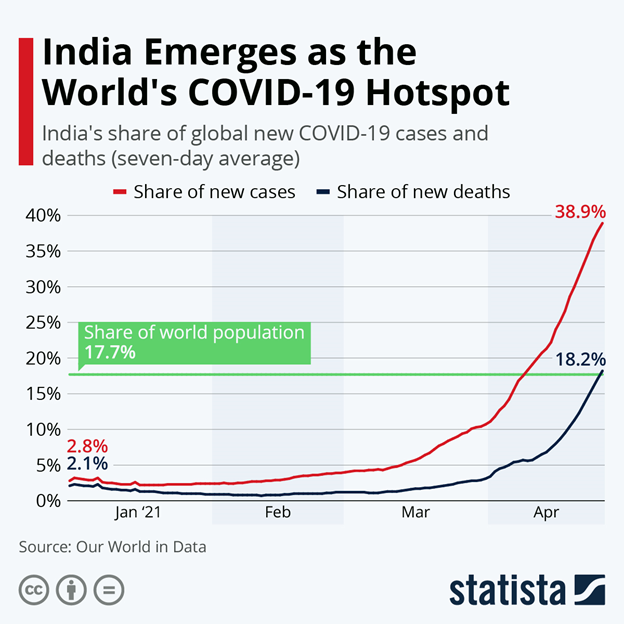 India’s food supply chain is a double-edged sword. India requires millions of highly labor-intensive work for harvesting and transporting foodstuffs. However the methods in combatting a pandemic through lockdowns and social distancing threatens India’s ability to feed its citizenry. The Wall Street Journal article 8 April 2020 India’s Food Supply Chain Frays as Workers Stay Home, provides a background summary on how India feeds itself:

·         India’s food industry is highly fragmented consisting of millions of small farmers, selling through millions of middlemen who then deliver to millions of tiny shops.

·         Every food industry is labor intensive including the wheat industry, high mechanized in western countries.

·         Already there are fewer farm workers (particularly for the current wheat harvest), fewer trucks arriving to load and deliver foodstuffs to distribution warehouses and fewer warehouse laborers to unload and reload foodstuffs for local delivery.

·         The entire process is labor-intensive because wheat is harvested by hand, sacks of foodstuffs are unloaded and loaded on trucks using lines of men not forklifts, and local deliveries of perishable items are done by bicycle, not refrigerated trucks.

In summary the pandemic has made a robust food industry that provides employment to millions into a fragile one - an industry dependent on millions of people for face-to-face transactions making social distancing impossible to maintain.

With hundreds of thousands infected and additional prolonged lockdowns, it begs the question as to not only how India will feed itself but against a commodity price “super cycle” which has dramatically raised the price of food stuffs.

In the world’s largest democracy by population, Prime Minister Modi’s government is trying to suppress criticism of the government’s handling of the pandemic by using emergency powers laws. They are specifically targeting Twitter because of its extensive use in India for communication. A comprehensive overview of the battle between government and freedom of expression is in the Reuters article dated 26 April 2021 entitled India Asks Twitter To Take Down Some Tweets Critical Of Its Covid-19 Handling.

According to Freedom House, India was classified as only “partly free” with respect to state of freedom for access to political rights and civil liberties. The following chart entitled The State of Freedom in the World provides a global view. 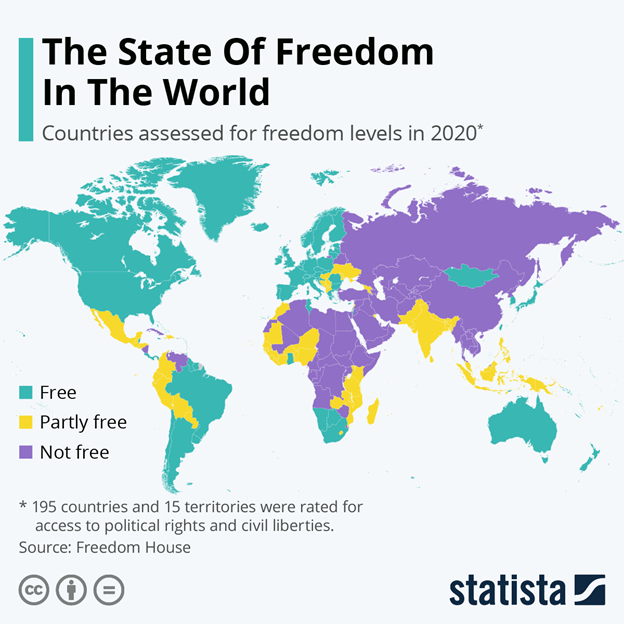 In lockstep with the deteriorating state of freedom is the deteriorating state of press freedoms including social media. The following chart provided by Reporters Without Borders entitled The State of World Press Freedom classified India as a “difficult situation”, a profound fall from grace for India unlike Russia and Brazil which have the same classification but that are far younger democracies still hobbled by long histories of autocracies and dictatorships. 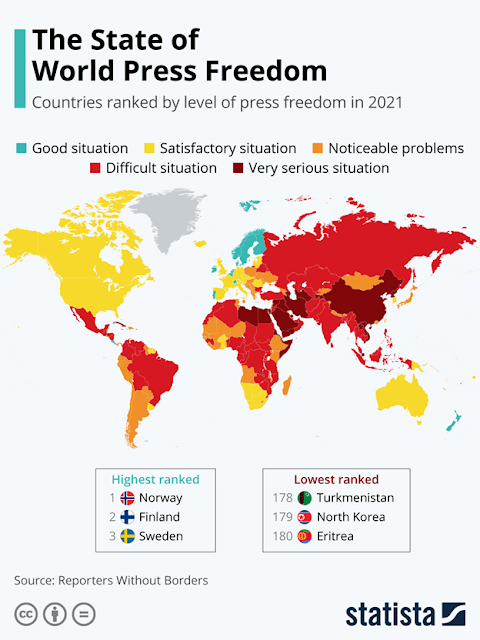 The most disturbing trend is indicated in those last two charts in which state freedom is classified as “partly free” and press freedoms are classified as “difficult situation” which represent just one step from away from the classification of autocratically ruled China. This means that the democratic protections afforded to the Indian citizenry and the press have been degraded to the point of being a whisper away from de facto autocratic rule.

As the viral surge worsens Modi, the quiet megalomaniac, is already losing popular support. According to Morning Consult, a US data group, Modi’s approval rating has declined precipitously from 74% in late March to 65% as of 4 May. If such a trend continues then Modi’s re-election odds for the 2024 national elections will decrease considerably. For this reason he may impose draconian measures to retain his political power in the form of an indefinite state of emergency or worse.

Already the underlying dystopic elements are in play to trigger a potential violent socio-political fallout – perhaps widespread civil unrest - particularly against the backdrop of the Modi administration’s aggressive pre-pandemic discriminatory policies against non-Hindus and enthusiastically enforced with violence by a de facto militia of true believers.

If India should collapse into the depths of autocracy, along with China’s 1.4 billion population, the two autocracies would represent almost 40% of the global population of 7.4 billion and leave few countries in Asia, notably Japan, Taiwan, Australia and Singapore as strong democracies.

Posted by Atthehighestelevels at 2:41 PM