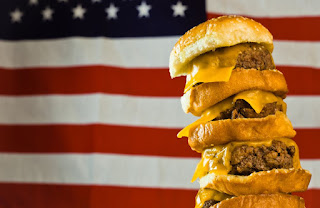 The Meat of the Matter

Since then for most Americans a meatless lifestyle is unpatriotic. It’s an American’s culinary Second Amendment “right” to affordable red and other meats particularly during the holidays such as Thanksgiving, Christmas, and the endless open BBQ buffet Memorial Day through July 4th and Labor Day weekend as plentiful leftovers are de rigueur. Meat consumption is unabashedly the “American way of life”.

While the US west is suffering through its version of Dante’s Inferno with severe drought, limited irrigation and potential firestorms, the production of beef is the ‘thirstiest’ of foods. According to the following chart entitled How Thirsty is Our Food? provided by the Water Footprint Network, bovine meat requires 15,415 liters of water to produce one kilogram of meat; or 4,072 gallons to produce 2.2 lbs of meat! [One liter equates to 0.26 gallons; 1 kilogram equates to 2.2 lbs.]. 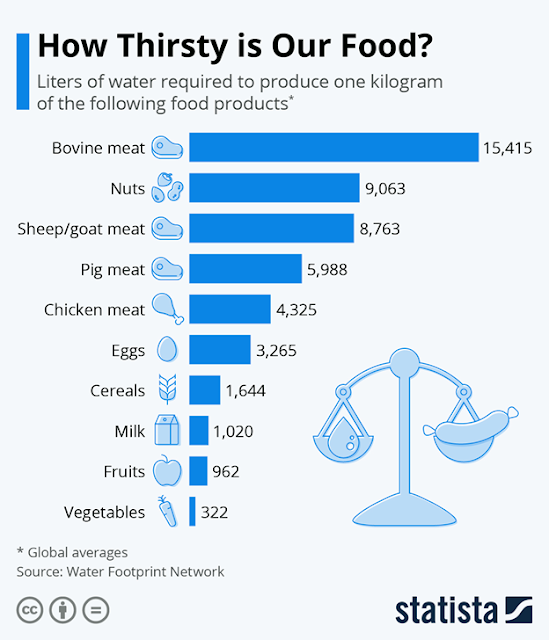 The blame for this environmental Armageddon in the making has ceaselessly been exclusively heaped on manmade climate change. Historically there have been cycles with drought and severe drought in the region, however the crisis was not as dire back in the day because the US had a pre-WW II in 1940 of 132 million, a country emerging from the Depression where few people could afford to eat meat regularly.

Fast forward to the year 2020 with an America with almost triple the population with 331 million, extensive development and population concentration in those present-day drought areas with historically scarce water resources.

Furthermore the USA is far more prosperous with a soaring demand for meat and meat-products which require evermore water resources. For this reason this creates the inevitable train wreck with droughts and water shortages.

This severe crisis was delayed because of agribusiness science through potent pesticides and genetically modified crops which in turn has placed greater stress on the land for decades against a global warming trend.

This trend has continued for decades and now mother nature wants to put us on a prolonged fast with her scorched earth policy through droughts.

The following chart entitled The Biggest Producers of Beef in the World provided by the UN’s Food & Agriculture Organization and the US Department of Agriculture indicates the US as the #1 beef producer which, according to the aforementioned chart, would require substantial amounts of water. 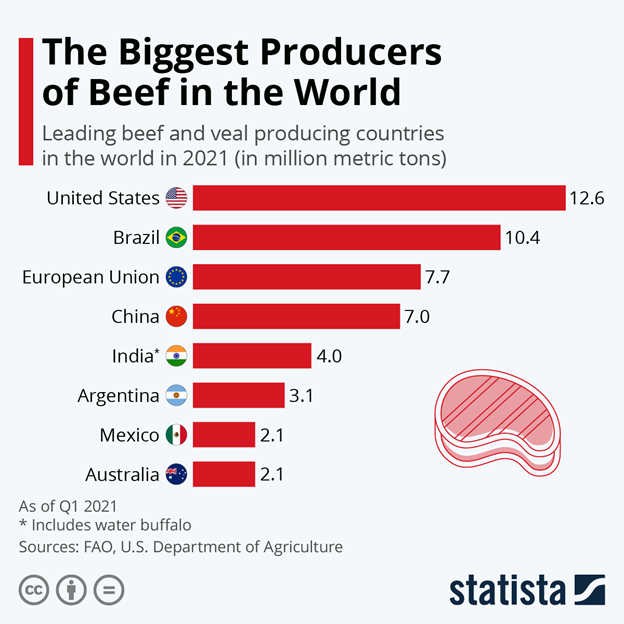 What naturally follows is that the US has the highest consumption of meat per capita according to the following chart entitled The Countries That Eat the Most Meat provided by the Organization for Economic Cooperation and Development. Throughout history meat was a luxury. As prosperity became global, regions where meat consumption was affordable only for the upper class, is part of a regular diet in China, India and Africa whose combined population is 3.8 billion or 50% of the world’ population. The resources (water, land, feed) required for what has been labeled, “the largest ramp-up in human history” has stressed and degraded the global ecological system.

Domestically the American consumers’ insatiable hunger and thirst has unfairly labeled agribusiness as the sole villain in this spiraling problem. For this reason I prefer to label them as merely an enabler responding to consumer demand in an increasingly more prosperous capitalistic society.

As disposable incomes increase consumers become more demanding for “the finer things in life” as agribusiness responds accordingly by becoming evermore creative by increasing food yields through science. For example in 1925 it took a chicken 150 days to grow to an adult. Today it takes a mere 47 days. The foods and drugs that are forcibly administered to present-day chickens to become so plump so quickly will make your stomach turn.

The question is whether exploding food, particularly meat, prices will be enough to alter Americans’ eating habits. As inflation continues unabated, meat will become unaffordable except for the economically well-heeled.

The public outcry on meat production shortfall and exploding prices is more symbolic of several generations’ “right” to plentiful and affordable meat rather than admit meat is neither essential nor a survival food. Nonetheless this change is the uncomfortable symbolism of the downfall of a slice of American way of life.

The cyber-attack on mega-meat producer JBS may be one of subsequent cyber attacks on food & beverage producers. The one class of producer that will impact Americans in far more insidious ways than meat is alcohol – yet another item under America’s second culinary amendment.

Traditionally consumed as a social “lubricant” it has many dark functions such as a psychological painkiller that has resulted in alcoholism, broken families & relationships, violence, road deaths and alcohol related illnesses.

This trend has grown exponentially before the Covid lockdowns as indicated in the following chart entitled Then & Now Deaths From Alcohol in the US provided by the National Institute of Alcohol Abuse and Alcoholism. 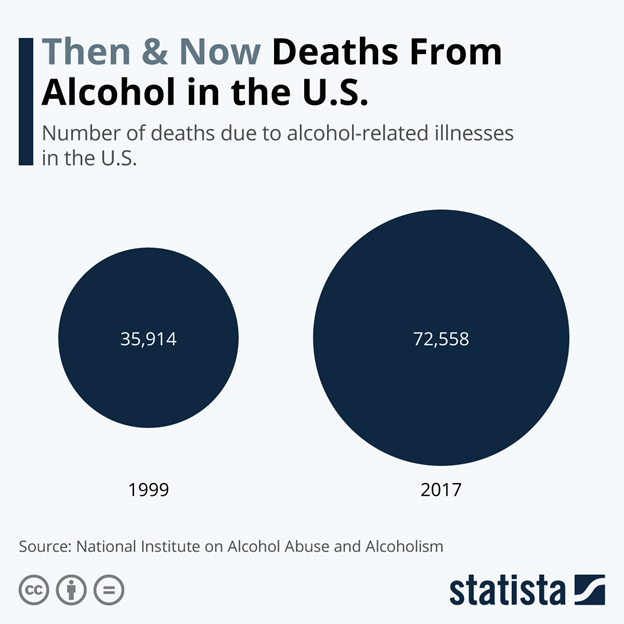 The trend translates into a 4% increase every year for 18 years!  With respect to demographics Caucasian women accounted for the greatest increase in deaths.

Furthermore according to a report entitled “Alcoholism: Clinical and Experimental Research” alcohol was deadlier than illicit drugs including opioids in 2017 with 72,224 drug overdoses, 334 less than deaths related to alcohol!

Reducing the availability of alcohol and inevitable rising alcohol prices would deprive many Americans of their ‘fix’ which has exploded since the Covid lockdowns and which continues with many households under financial stress. For family breadwinners with alcohol-related problems, despite higher prices they may follow the Russian story as follows:

The father comes home and tells his children, “I’m sorry kids but the factory has reduced the pay of all workers.” The children then ask the father, “Does that mean you’ll drink less?” to which the father replied, “No. That means you’ll eat less.”

Otherwise it will simply be Plan B in which Americans will seek other sources such as controlled substances to satisfy their cravings.

Posted by Atthehighestelevels at 4:23 PM No comments: