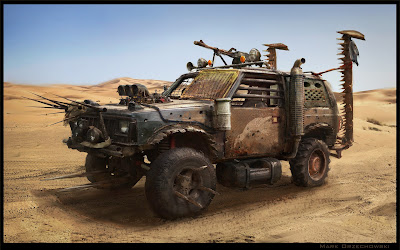 Against the illusion of an economic recovery with pre-pandemic levels of citizens out & about during these summer months provide is the illusion of entering an acceptable new normal way of life. However the dark underbelly of government and big business are pre-positioning themselves for the inevitability of an economy that could be described, using the decades-old Wall Street adage, “An elephant on chicken legs.”

Impacting the common man is a policy change issued by some major banks which have suspended or eliminated personal lines of credit regardless whether their credit rating is superb. Everyone at this level is cognizant that there is no more road for the Fed to kick the can as they batten down the hatches for the arriving day of reckoning and its consequences.

What does this mean at the street level for the average citizen? A dangerous world in which the cavalry won’t be coming whatsoever.

The dominant messages from urban and rural preppers have focused on food, safety & security along with adjusting one’s mindset with respect to the greater risk of a worst-case scenario. Translation: Mad Max in America.

Whatever level of preparedness, these individuals are targets by the unprepared zombies who will aggressively steal their survival motherlode.

Furthermore regardless how assiduously careful one has acquired and guarded their survival goods, the curse of technology has probably already betrayed them long ago. Their dependency on the internet has resulted in dozens of individuals who are quite familiar with both the prepper and non-prepper’s socio-economic profile, assets and recent purchases. In other words they have already been identified, profiled and targeted.

The most insidious and dangerous type of predatory prepper is the ones you know. A quick summary list includes package and food delivery services, sanitation, postman and other service individuals not to mention family, friends and neighbors. Any or all of them who live and work amongst us and probably know us better than we know ourselves can overnight transform themselves into ravaging barbarians under the right circumstances willing to “aid and abet.”

With respect to food security a target rich demographic are shoppers at high-end venues such as Whole Foods. In a somewhat different but still lucrative category are shoppers at stores like Costco who buy in bulk and who most likely own homes and have families.

Potential online predatory predators include consumer services, banking and other financial services from which there have been anecdotal tales of customer service representatives maintaining a list of particular clients for sale to the highest bidder.

The New Barbarians in the Mad Max Landscape

Should things devolve into chaos the urban and rural jungle will roar to life and unleash various types of predators ranging from lions, wolf packs, hyenas, wild dogs crocodiles to solitary predators such as tigers or snakes. The assaults on businesses, families and individuals will not be random because these predators have done their “due diligence” to determine the juiciest targets whether based on the specific neighborhood, block, home, family or individual. Make no mistake - everyone has been profiled and targeted at some level. The actual assault will be contingent on priority and ease of access with Ocean’s Eleven precision.

A cinematic analogy to this process is the heist movie entitled “The Anderson Tapes” (1971) starring Sean Connery, Martin Balsam, Garrett Morris, Dyan Canon, Alan King and a young Christopher Walken. The plot in a nutshell: thieves plan to rob an entire Fifth Avenue building of wealthy residents during the Labor Day weekend.

Undoubtedly you’ve already correctly guessed that the mastermind and leader of the crew is Sean Connery as Duke. He’s just released from a long prison stint and wants to hit it big-time right away. Duke’s bitterness to life’s double-standards and that justifies his robbery scheme has the same urgency as 21st century thugs who are waiting for societal breakdown in the aforementioned video.

Duke’s recruitment of diverse specialists include an electronics security expert who convinces him, a young Christopher Walken, that there’s no guilt in ripping off Big Business and the wealthy. The movie is already 50 years old but human nature never changes.

The greatest fallacy of escaping a societal breakdown is the dash from the burning cities to the idyllic rural sanctuaries. It’s a deeply flawed assumption because violent crime has surged everywhere. Mainstream media has focused this trend on the urban areas but anecdotally these same trends are occurring in those supposed safe communities. Taking the quote from the 17th century poet Jean de le Fontaine, “A person meets his destiny on the road he takes to avoid it.”

Because those fleeing the urban areas are wealthier than their lower-class neighbors, the thugs will simply “follow the money” and probably already know the locations of their safehouses. Furthermore, the rural areas are an illusion of safety & security. Wealthier residents in a far less dense population environment are target rich will have far less law enforcement to protect them and who would be out-numbered and low firepower against a mini-convoy of thugs. It wouldn’t be surprisingly that some thugs have already taken residence in their redoubts as violent squatters.

For those with a choice the question is whether to remain in urban cauldron or rural frontier each one defined by their particular tribalism whether it be racial, ethnic, socio-economic, or just a familiar regular face.

Taking a logistical page from ISIS, these thugs will use SUVs in convoys just as ISIS used signature white Toyota trucks to terrorize small towns in the Middle East and Africa. For this reason there’s the perilous high risk of traveling or commuting between sanctuaries like the impala, gazelle or zebra crossing a river filled with crocodiles yet who still have to face wild dogs on the other side.

Finally there’s no safety in rural paradise since some of the dangers can be internal with long-time residents and even local law enforcement who can politely “shake down” those part-time or recently arrived residents with those easy smiles. Rural communities can have their “sordid underbelly” just as New York, Baltimore or Portland.

Furthermore car thefts and car jackings will probably soar for hard to acquire and expensive spare parts. Present-day it’s catalytic converters and soon it may be tires because of a rubber production shortfall in Asia where 93% of the world’s natural rubber is produced.

Additionally the automotive targets won’t be your typical high-end luxury vehicles rather any vehicle. In other words the drivers of 10-15-20 year old economy cars are just at risk of a carjacking attempt as the drivers in a Maserati.

Law enforcement has been militarized for years but now criminals have upgraded their firepower through the illegal acquisition of more powerful firearms. The following chart entitled 1,900 US Military Firearms Were Lost or Stolen in the 2010s provided by the Associated Press’ own investigation, shows a breakdown of the weapons unaccounted for during this period: 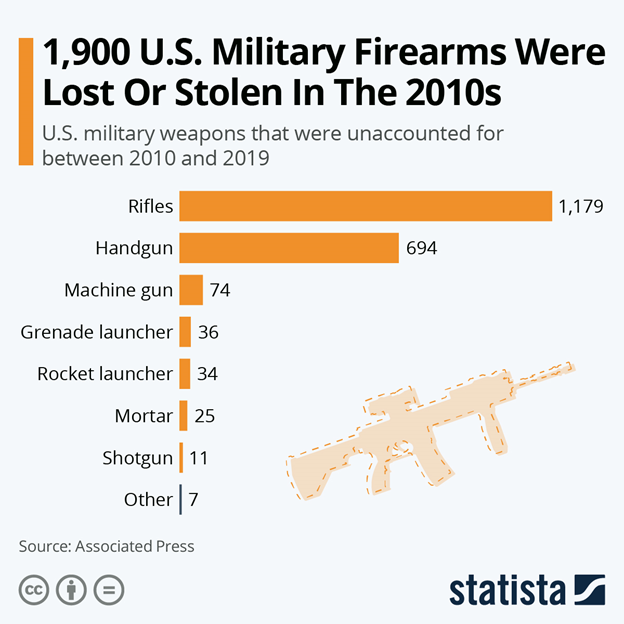 Furthermore it wouldn’t be inconceivable that the de facto warlords of these groups are battle-hardened ex-military and personally familiar with utilizing military weapons with accompanying home invasion tactics.

There is a myriad of factors that can provoke a degradation of quality of life whether the degradation takes place over several months, weeks or overnight can trigger a bad case scenario:

·         A more severe and sustained series of meteorological events.

·         Political risk upheaval and instability in government leadership due to scandal or incapacitation.

·         Stock market crash or a brutally grinding decline that forces the government to declare a Bank Holiday which freezes financial accounts for days.

In sum there are no safe havens, only the degree of risk. Regardless your personal preparation plans should continue unabated with the psychological acceptance and adjustment to a grim reality. Finally maintain as small a footprint as possible with respect to your social media profile and communications to protect your prep readiness.

Posted by Atthehighestelevels at 6:49 PM